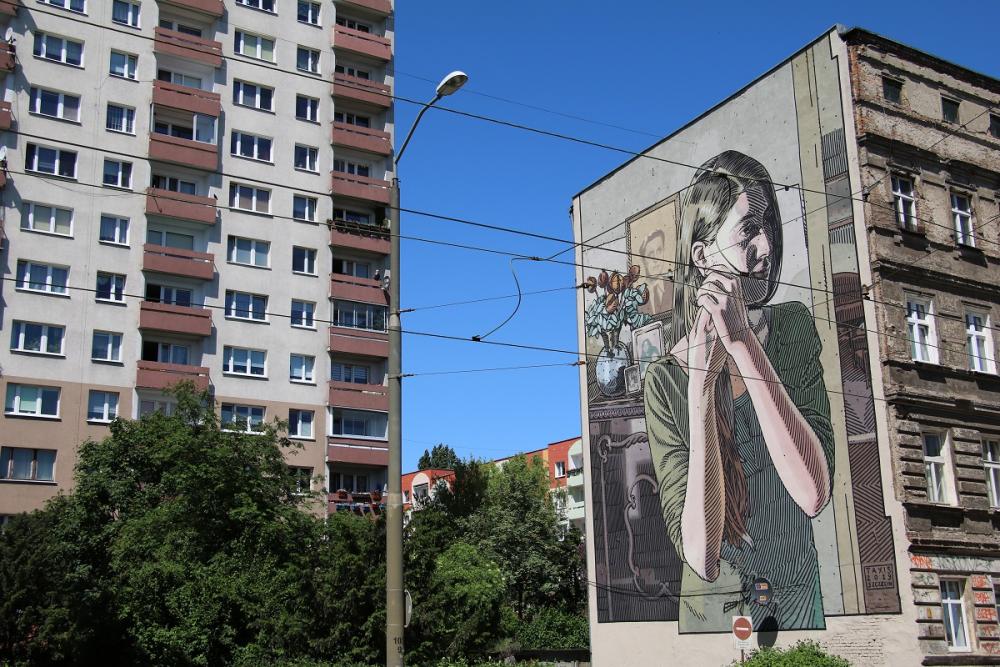 Murals, once the only large-size advertising medium, have now become a fashionable form of street art that perfectly weaves into the urban landscape and helps build a unique atmosphere in abandoned neighbourhoods awaiting renovation. Such enormous, colourful works can also be seen in Szczecin. Often painted on the uppermost walls of tenements, they lend their surroundings a sense of big-city style and character.

In pre-1989 Poland, murals mostly used to serve propaganda purposes. Their purpose was to advertise local or large-scale enterprises, and promote slogans associated with the bygone system. Such paintings can still be found on Portowa Gate, in Lenin Square (modern-day Szarych Szeregów Square), Kaszubska Street and Żołnierza Polskiego Square. Many parts of the city still conceal communist-era murals, such as the one on Batalionów Chłopskich Street advertising that long-gone company, Polmozbyt.

Many unique and diverse murals can be found in Szczecin, their themes ranging from patriotism to the individual visions of their creators.

Many murals are created in Pomorzany. This neighbourhood is particularly popular with artists due to its diverse architecture. Old German standalone tenements are frequently found interwoven among the post-war residential buildings. This results in enormous surfaces perfect for this type of painting. Pomorzany murals can be seen at 44 Powstańców Wielkopolskich Avenue and 68 Kolumba, 23 Budziszyńska and 8 Chmielewskiego Streets.

If you don't have enough time to wander around and enjoy the city, and you have arrived by train, several large-size murals can be found in Nowe Miasto – near the Main Railway Station, including in Owocowa and at 11 Czarnieckiego Streets.

The city centre is also full of hidden murals, the "Man on a rope in the clouds" can be seen at 6 Ściegiennego Street, and the "Hall of Fame" at 77 Wyzwolenia Avenue. Many murals are also created on the pillars under Trasa Zamkowa. The area has become an impressive gallery for various smaller murals as well. One which stands out the most is a mural depicting two traffic police officers. The purpose of the mural is to warn drivers about exceeding the speed limit.

You can also find modern paintings in the more remote, northern parts of the city. As part of a project to introduce the residents of Skolwin to art, two murals have been created at 128 and 161 Stołczyńska Street, which perfectly match the atmosphere of the neighbourhood.

Local street art is still developing, with new works being created every year for everyone to enjoy. Artists who have contributed their art include Lump, Michał "Sepe" Wręga, Jakub Bitka, Dariusz Miliński, Mariusz Waras, Grek Dimitris Taxis, Zesar Bahamonte and Kreda. We are looking forward to seeing more!